Lyme, the heart and simple screening and monitoring

A complication of Lyme disease, well accepted by both sides of the debate is Lyme carditis. Typically, EKG changes are found on the EKG. Some proponents recommend that all Lyme patients have an EKG. This is probably a good idea.  I have had several patients in my practice who have developed this disorder of electrical conduction of the heart. One patient nearly had a permanent pacemaker inserted but the third degree heart block cleared with courses of IV Rocephin. A current patient has a permanent pacemaker.

It seems that most chronic Lyme patients complain of palpitations. Occasionally disturbances of rhythm are found: generally EKGs are normal which is reassuring.

I have seen other cardiac complications. One patient with sudden chest pain and difficulty breathing required an urgent surgical procedure. Inflammation of the sack around the heart, the pericardium, had resulted in a constricting build up of fluid around the heart. This was quickly relieved when a "window" was incised through the pericardial sack.

Other patients have had Lyme myocarditis, inflammation of the heart muscle. This condition may have serious, even fatal consequences. Three cases of sudden cardiac death in young men was reported last year by the CDC. The repeated insistence by many on the other side: "Lyme has never killed anyone," speaks volumes regarding the lack of credibility and the "expertise" of the "experts" affiliated with the IDSA.

Generally, the biggest cardiac concern with out patients is not Lyme per say, but complications associated with medications used to treat Lyme. Many, if not most Lyme patients, take a cocktail of drugs which may have numerous interactions. Cardiac complications may occur. For example, the FDA sent out a warning about the cardio-toxicity of Zithromax last year. My greatest concern, "first do not harm," is the remote possibility that drug(s) may cause serious rhythm disturbances in the heart rhythm, including. V-tach/V-fib. These events may be heralded by a prolongation of Q-T interval, an alteration in normal electrical functioning of the heart. 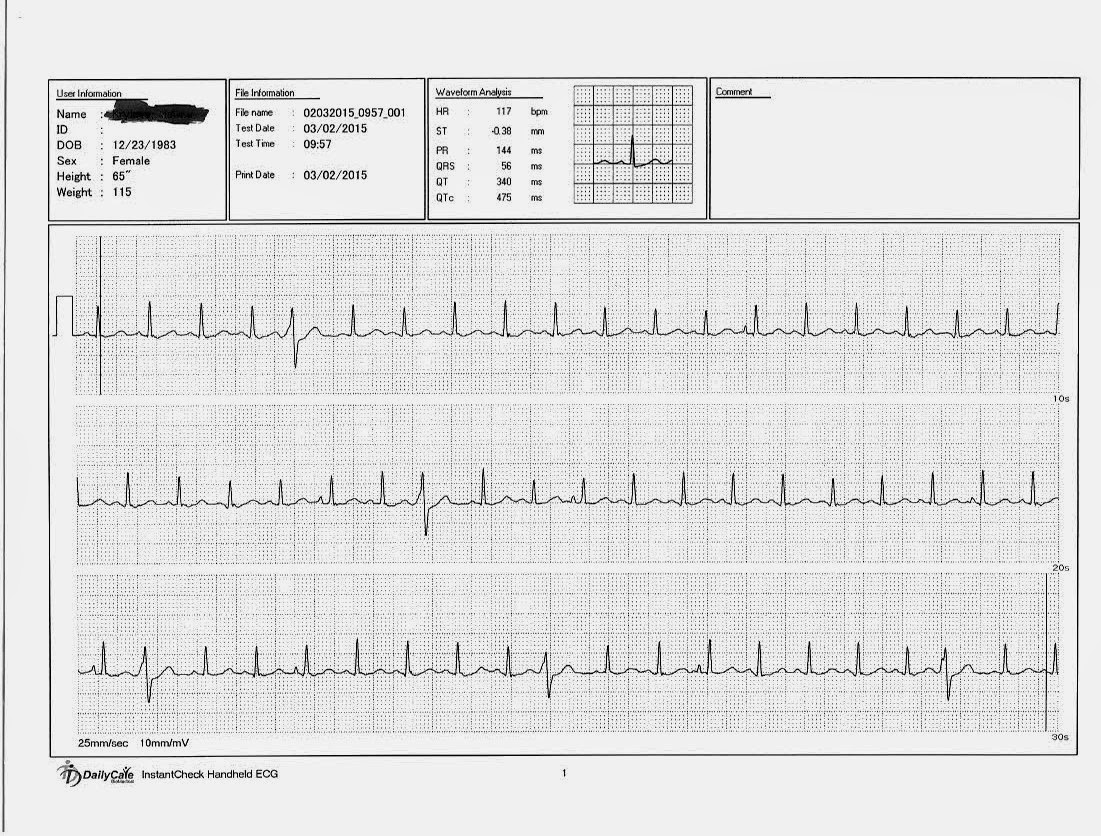 This tracing was taken from a 32 year old female seen in my office today. She has been complaining of palpitations.  This tracing shows an irregular rhythm with PVCs. PVCs, premature ventricular contractions. These are generally benign but require cardiac evaluation.  More importantly, the last value recorded under waveform analysis, QTc, the corrected QT interval. (This measures the time it takes the ventricles to electrically repolarize after depolarizing) is 475. The interval should measure 460 or less. This may be a drug affect.

Her medication list was reviewed. She takes the anti-depressant nortriptyline, prescribed by another physician. She takes a cocktail of other drugs prescribed by me, at least one of which is on the very lengthy list of drugs associated with QT prolongation. It can be challenging finding drugs not on the list.

Based this information she was instructed to hold two drugs and follow up with a cardiologist. 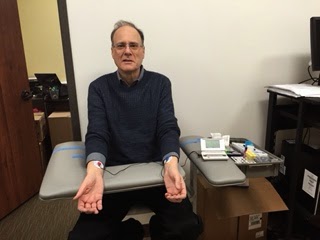 This is me -- having an EKG done with our new(ish) device sitting on the arm of the phlebotomy chair.  Only 2 electrodes are used on each wrist to obtain a single channel EKG;  the procedure takes only minutes. The charge is a fraction of a full 12 lead EKG which is not needed for screening and monitoring patients.

It seems that that most Lyme patients experience palpitations at one time or another and that this symptom improves with treatment. In the vast majority of cases there is nothing to worry about. But EKGs, along with blood counts and liver tests should be considered when monitoring effects of treatment.

Posted by Lyme report: Montgomery County, MD at 11:09 AM

HI Doc: Below is an article on a boy in MA with a heart issue from Lyme. Sounds like he is over it but as we know this can come back.

How can I explain this to the world that there is a man who can cure HERPES, I was diagnosed for the past 1 year I have being into HERPES since 1 year, so I decide to look for help in the internet then I found a post write about this great man called DR. Yakubu , people say good thing about him that this man have cured, a lot of people in the internet, him has power's to cure HSV1 AND HSV2 I don’t believe that there is a cure for Herpes Simplex Virus because though there is no cure for herpes that what I have in mind HERPES had no cure well , my HERPES is negative through the using of herbal cured of DR yakubu , I contacted this man for help because of what i see in the internet. if you need his cured just email him now on dr.yakubuherbalhealingclinic@gmail.com , thank you DR. i will never stop shearing you testimony DR. Yakubu . him Can as well CURE THE FOLLOWING DISEASE:-1, HIV/AIDS, 2, Diseases of the hear 3, Malignant tumors 4. Cardiovascular diseases 5. Diabetes mellifluous 6.Influenza and pneumonia 7.Alzheimer's disease 8. hsv1 - hsv2. If you need LOVE SPELL. E.T.C contact him dr.yakubuherbalhealingclinic@gmail.com or you whatsapp him on +2348057353647...
Dr.yakubu 하나님은 내 삶을 회복시켜 주신 것에 대한 축복을 계속할 것입니다. 나는 사람들에게 증거를 계속 나눌 것입니다.

Before people said there is no cure for herpes virus but today many people have now believe that there is a cure, herpes virus can be cured through Africans roots and herbs, Dr.chala he is the one of the great herbal doctor in Africa and he has the cure on this virus last month he share his herbal medicine in some medical hospital and now he is well recognize as one of the best in Africa, you don’t have to be sad any more or share your tears any more on this virus when the cure have already be find by Dr.Chala email him on dr.chalaherbalhome@gmail.com or https://
drchalaherbalhome.godaddysites.com or https://mywa.link/dr.chalaherbalhome