The whole world is on disability 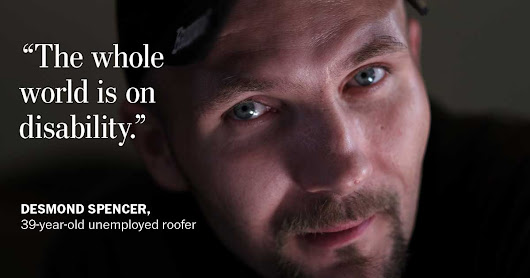 Its rural America. The whole word is on disability.  The number of Americans surviving on government disability checks has surged to 17 million and the number keeps growing.   Pain clinics are overflowing.  The 39 year old man, pictured above, has recurring painful, swollen fingers and recurrent knee pain.  Is it really due to past use of a hammer and a distant fall ?

Baby boomers, middle aged, retired or pushing retirement age, are the first generation of American who feel worse than their parents did at the same age.  32% of their parents reported excellent health and only 13% of (my group) boomers claims the same.  My cohorts have more aches and pains and are two times more like to need a walker or other assistive device compared with their parents.

Boomer parents smoked and loaded up on butter and cholesterol with impunity. They didn't go to gyms or run. They still had a better quality of life.

There is an exception: Hawaii, the one state with no reported native cases of Lyme disease.

Boomer parents didn't have fibromyalgia or chronic fatigue syndrome.  Boomer  parents walked in the woods without a second thought.

Baby boomers had no idea the woods weren't safe. They had no idea that newly arrived, tiny, nearly invisible ticks could make them deathly ill.  They were into exercise, hiking, camping; the great outdoors.

The CDC admits there are 300,000 new cases of Lyme annually. This a low ball estimate: most cased go unrecognized. People are getting sicker, and in so many unexpected ways. How do you tie the epidemic of MS with arthritic joints (if you are mainstream)?

Primary care clinics are deluged with a new class of patients. An onslaught of chronic fatigue syndrome, fibromyalgia and psychiatric illness -- especially somatization disease. There is an epidemic of craziness. Doctors frequently cringe when certain names appear on their daily schedule. Published data state somatization disorders is found in a small (stats vary, not clear)  but increasing percentage of the general population. Somehow these dreaded patients are filling the rosters of doctor's appointment schedules. Its like a zombie apocalypse.

What of the patients. The miserable souls get stuffed with pills that just make them feel even worse. Cymbalta and Lyrica. The patients are bounced around to numerous specialist and subspecialist, all anxious to scoot them out their offices as quickly as possible. Do not pass go, do not collect 200 dollars. Finally the patients turn to OxyContin which takes the edge off their misery. Many of the miserable sit on the porches of their dilapidated houses, nursing one too many beers, washing down an Oxy or two.

The whole word is on disability.

Readers, you can make a change. Contact your local politicians, state delegates, etc. Tell them to stop the witch hunts and persecution of the few doctors who challenge the status quo.

Its like medical marijuana, which helps some Lyme patients. The system tried to stop it. The FDA and DEA are still furious.  Ultimately, public outcry was strong enough to find a path around the system.

Access to Lyme doctors should be a fundamental right, a civil right, a patient choice issue.


The CDC states that 54 million adults suffer with some form of arthritis, a leading cause of disability.

RESEARCH LETTER --- 2013 - Dr.Dana King, West VA.
ONLINE FIRST The Status of Baby Boomers’ Health in the United States: The Healthiest Generation? From 1946 through 1964, 78 million children (“baby boomers”) were born in the United States. In 2010, baby boomers made up 26.1% of the word population.1 Medicine has improved significantly during baby boomers’ lifetimes. Although these advantages have led to a progressively increasing life expectancy, 2 previous studies have shown mixed results regarding whether baby boomers are healthier than prior generations.3,4 The present study examined the health status of aging baby boomers relative to the previous generation to provide a vitally important context for health workforce and policy planning in the coming years.
Methods. National Health and Nutrition Examination Survey (NHANES), including NHANESIII(1988-1994) (for previous generation) and the NHANES for 2007 to 2010 (for baby boomers), focusing on respondents  46 to 64y years during either period... Results. The demographic characteristics of the cohorts were very similar except for the proportions in each racial/ ethnic group, with greater proportions of non-Hispanic blacks(11.3%vs9.4%)and Hispanics (9.8%vs3.7%) in the 2007-2010 group compared with the1988-1994 group (P .001). The mean (SD) ages were 54.1 (0.03) years in the 2007-2010 group and 54.5(0.03) years in the1988 1994 group; there was no difference in sex between the 2 cohorts (49.1%male [2007-2010 group] vs 47.5% male [1988-1994 group]). Overall health status was lower in baby boomers, with 13.2% reporting “excellent” health compared with 32% of individuals in the previous generation (P .001). Of the sampled baby boomers, compared with the previous generation, 6.9% vs 3.3% used a walking assist device (P .001)