A 58 year old male referred to me in April, 2013 (by another physician). Symptoms were of 18 months duration. He felt well until one night he awoke with bilateral cervical and pain in both upper extremities. His LMD (local medical doctor) treated him with a course of NSAIDS which was ineffective. He was referred to rheumatologists who diagnosed a frozen shoulder syndrome and prescribed physical therapy which was initially beneficial. (the phrase LMD, although pejorative, is not as insulting as the appellation "provider").

Contemporaneously, he complained of severe fatigue, malaise, recurring shoulder pains and pains involving both legs. He developed pain and swelling in both wrists and ankles. A diagnostic work-up was pursued.

A diagnosis of Lyme disease was made and the patient was treated with a three week course of doxycycline, 100 mg twice daily for 21 days. This was not helpful.

An EMG was consistent with a muscle disorder. A muscle biopsy was performed at a major University Hospital. The report read: "Inflammatory myopathy, nonspecific." "This pattern can be seen in dermatomyositis,...other systemic rheumatological disorders such as lupus or rheumatoid arthritis. Clinical correlation is essential."

The patient was treated by his rheumatologist with systemic steroids for several months without improvement. The Aldolase level (muscle enzyme) was unchanged.

The patient was seen by me 5 months ago, after more than one year of diagnosis and treatment from a major University setting, without benefit. Further laboratory testing per me was remarkable for a C6 peptide greater than the assay is able to measure.

I diagnosed primary Lyme myositis, a relatively rare condition in my experience.

Moderately aggressive therapy was initialed with a combination of oral antibiotics.

After 8 weeks the patient was feeling much improved. The pain and swelling were gone. Fatigue was minimal and he complained only of mild stiffness.

After 8 weeks, aldolase ( a muscle enzyme)  was in the normal range, 4.8. The CK remained normal. The ANA was entirely negative, slightly elevated before. The CRP was reduced from about 30 to 3.25(almost normal).

He was last seen at the end of September, 2013. He indicated that he felt essentially normal, especially over the past 3 weeks except for mild muscle stiffness. He denied any constitutional, other musculoskeletal or neurological symptoms and was back to his normal activities.

Note: A group of rheumatologists did an exhaustive workup covering the academic waterfront for every known rheumatologic disease. The pathology report supported this approach.

The patient had been appropriatelytreated for Lyme disease according to the IDSA guidelines adopted by the American Rheumatological Societies. Therefore, although the diagnosis was not clear and the patient had not responded to appropriate therapy; it was clear the answer was not chronic Lyme disease;  a disease which does not exist as supported by experts in the fields of rheumatology, neurology, infectious diseases and evidenced based medicine based on peer reviewed studies published in the most prestigious journals.
Posted by Lyme report: Montgomery County, MD at 9:04 AM 7 comments:

I am presenting a series of images from blood smears from my in house lab. I find this to be a truly remarkable image.
I have treated this patient for severe, relenting disease for a period of two years.  She is on a second round of IV antibiotics. Progress has been slow. Night sweats, nightly fevers, air hunger, headaches and muscle pain have been prominent, persisting symptoms. She consistently tested negative for B. microti and B. duncani until recently. She now has  a high titer of antibodies for WA1 or Babesia duncani after numerous rounds of anti-malaria therapies. I am not sure she has B. duncani. I think she may be infected with a cross-reacting species. This sero-conversion as more commonly seen in Lyme Western Blots.  She has failed every regimen for Babesia. This smear was obtained which she is on IV clindamycin and quinine (which she tolerates well). This smear shows a typical Babesia "bowtie." This image was obtained from a fresh smear stained with Wright Giemsa. 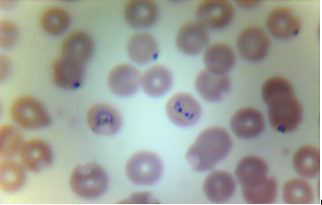 Blood smear of BLOs from our office lab 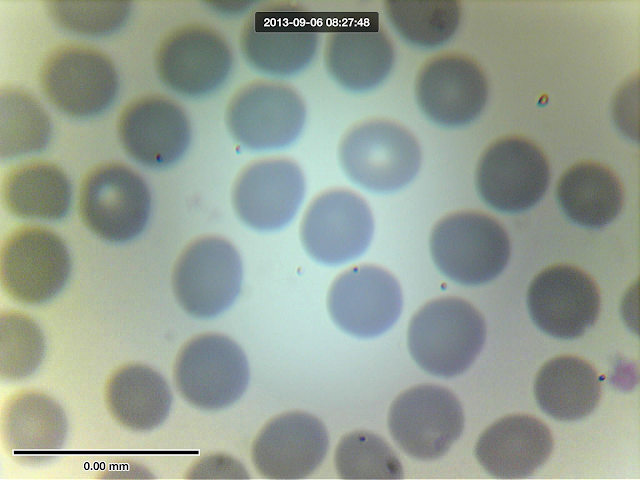 Blood smears from my office lab reported as part of a series.
This image from one of my patients shows indeterminate findings. Parasitic organisms are seen within a red blood cell. Bartonella is frequently seen at the edge of red blood cells but is also found inside cells. These organisms are too large for typical Bartonella --  although there is a lot of variability in the size of differing species. These organisms cannot be identified as Babesia since they lack clear diagnostic characteristics. For now I have to classify these findings under "mystery bugs." 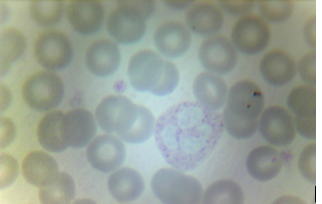 These images are from my office lab which now performs in house, diagnostic blood smear examinations for our patients. All of these images come from patients with negative serological blood test results.
This a  Giemsa stain from my office lab. The tiny dot at the bottom of the slide is typical of Bartonella-like organisms. These are typically very small. The bacteria stains dark blue.  Note, the larger purplish splotch indenting a red blood cell comes from platelets. The larger cell is a typical white blood cell called by various names, including: neutrophil, poly, granulocyte. 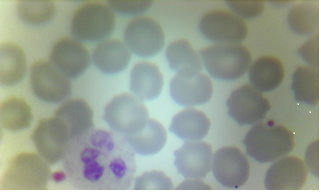 Blood smears are a great addition to the evaluation of patients with Lyme disease. The smears must be performed within an hour of drawing the blood.  I now include this procedure in my office as a routine part of the evaluation of my patients.
My next blogs will highlight a series of my blood smear results.
An 18 year old female presents with a complete inability to function. She suffers with severe, unrelenting fatigue, migratory joint pains of both small and large joints, brain fog -- and when asked: recurring flu-like symptoms, low grade fevers, severe night sweats and air hunger.
She has a longstanding history of learning disabilities as well as ADD and depression.
At age 5 she had a "spider bite" associated with a rash. In addition, her mother, a lifelong avid gardener, with a history of severe Lyme disease was likely infected during her pregnancy with my patient.
Her laboratory work was "CDC positive" for Lyme. Serological tests for B. microti and B. duncani were both negative.
This Giemsa blood smear shows typical findings of Babesia, confirming the clinical impression. There are numerous species of Babesia which cause human disease, some known and others unknown. It is not possible to "speciate" these findings. 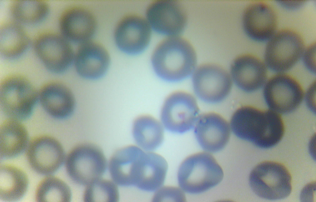