The 25-year-old female recently came to my office for evaluation of new onset chronic daily headache. This unfortunate young woman had been suffering with headaches every single day of her life the last 18 months. Historically, the problem began shortly after she returned from a camping trip in Ocean City Maryland. Upon returning home she had a sudden headache, mild flulike symptoms, fatigue and malaise. The headache is always right-sided in the temporal-parietal area. She uniquely described her headache is having a ram’s horn pattern of distribution describing a spiral pattern of pain. The pain was described is having a squeezing quality, not throbbing, associated with nausea at times. Pain intensity increases around time of menses.

One year prior to our initial consultation she been tested for Lyme disease. She had a positive EIA and 2/3 IgM Western Blot bands meeting the CDC criteria for a positive surveillance test. She was treated with doxycycline for 4 weeks which had no impact on the headaches.

Her neurologist informed her that Lyme disease not relevant to her condition and an infectious disease specialist felt that she been adequately treated for Lyme disease and that this had been excluded as a cause of her headaches.
She was prescribed a large number medications sequentially including: Topamax, Neurontin, Imitrex, Fioricet and many others none of which had any efficacy whatsoever.

The physical examination was completely normal except for subtle sensory deficits. Her ability to sense a cold object, in this case a metal tuning fork, was diminished in the hands and feet. This finding is generally dismissed by most neurologist as insignificant. In my experience, this finding is reliably present in at least 80% of my patients diagnosed with Lyme disease and is rarely present in healthy persons.

The remainder of her workup was unremarkable until I came to the blood smear. Here I documented a red blood cell filled with small stained inclusions compatible with bacteria.  A photo image is included here. 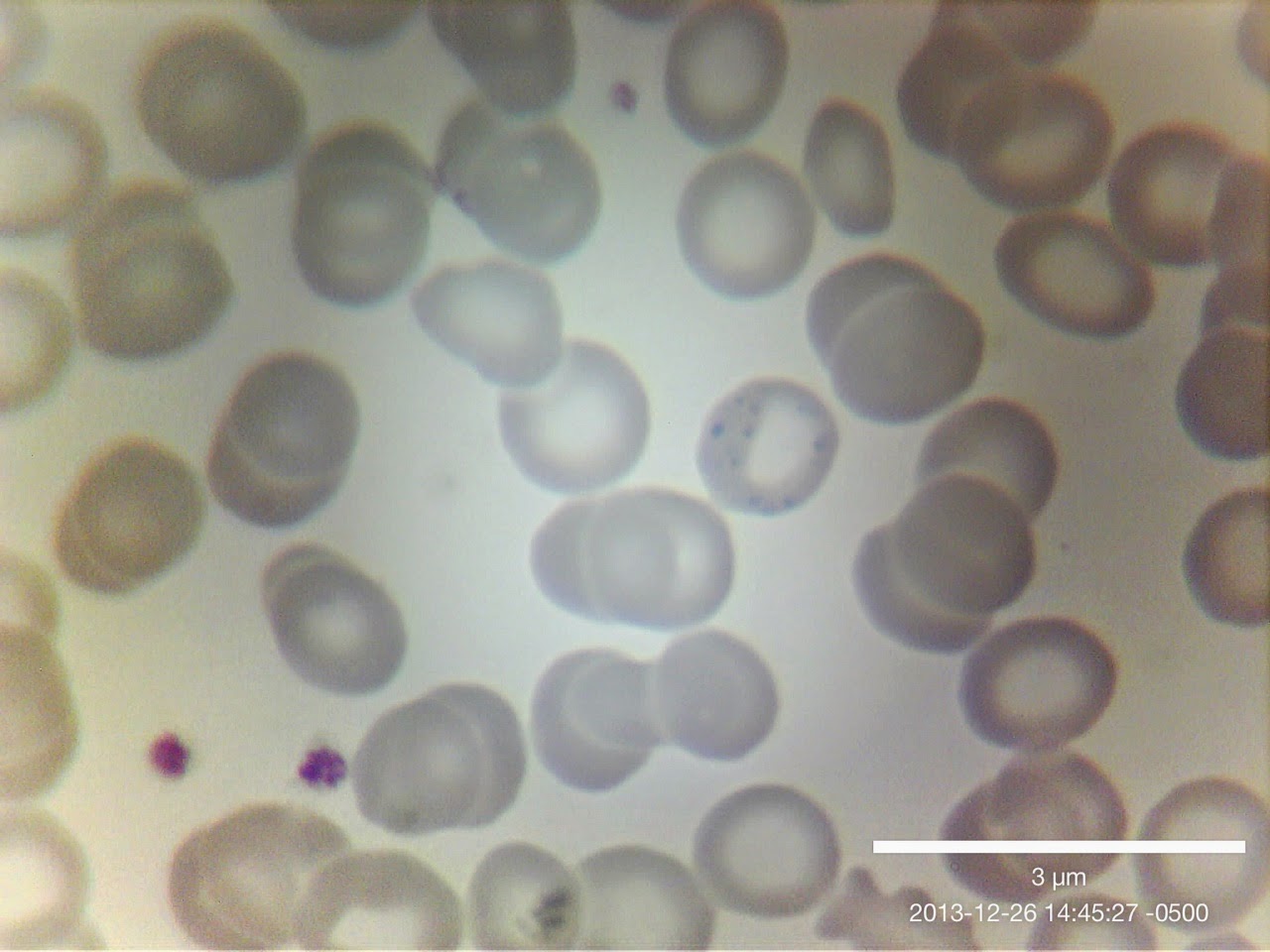 Bartonella species are perhaps the most frequent coinfecting organisms in patients with Lyme borreliosis. (Yes this contradicts my last blog). In the 2012 paper entitled “Bartonella spp. Bacteremia and Rheumatic Symptoms in Patients from Lyme Disease- endemic Region,” published in the CDC Journal: Emerging Infectious Diseases, findings from Dr. Mozayeni’s practice are described. Among 296 patients suffering with, Lyme disease, joint pain, chronic fatigue syndrome and fibromyalgia, 62% were found have Bartonella species antibodies. These species of Bartonella included: B henselae, B. Koehlerae, B. vinsonii subsp berhoffi and others designated Bartonella spp.

Bartonella species are fastidious, gram-negative bacteria with demonstrated affinity for intracellular localization in red blood cells and endothelial cells. Bartonella is the only genus of bacteria known to induce pathological angiogenesis (growth of new blood vessels). This may be associated with elevated serum levels of VGEF (vascular endothelial growth factor). In 2013 Maggi et al report the ability of Bartonella henselae to invade human brain vascular pericytes. Pericytes are small cells cells that surround endothelial cells and are an important constituent of the blood brain barrier.

Blood smears may suggest the presence of Bartonella. The diagnosis may be confirmed by PCR testing. For clinical purposes this may not be necessary.

This patient was treated with  Zithromax, rifampin and Tindamax. Combination rifampin with Zithromax is known clinically to be very effective against Bartonella species. Within four weeks of treatment the headache was completely abolished. However, the symptoms returned  within 5 days when the medication was discontinued by the patient and were once again abolished when the medication was reinstated. After 3 months on continuous antibiotic therapy the patient remains symptom free.

Correction:  Bartonella species are rarely seen within red blood cells.  The Giemsa smear most like shows a reticulocyte, an immature red blood cell and not Bartonella.  The diagnosis is usually clinical.
Posted by Lyme report: Montgomery County, MD at 10:51 AM

Hello. Thank you for your post. I have some questions about bartonella. Is it worth doing a manual blood smear, is it worth to repeat it several times? Will standard blood smear reveal bartonella bacteria? I had multiple tick bites in childhood (about 35 tick bites). After 10 years I became very ill, I had seizures (in temportal lobes, partial seizures), aggression, non-stop headache for many years. Lyme disease was positive but bartonella test were negative (but it was done after lyme treatment). I still have some problems, mild headaches, OCD, brain fog. Could it be bartonella? I live in central Europe (I think we have bartonella in ticks here too).

Sound therapy is popularizing these days because it is a very efficient and 100% natural therapy which has no side effects. Sound therapy can not only be used in such cases but can heal Lyme disease, heart troubles etc. There is no doubt the power of Sound Healing and positive thinking is astonishing.

This is really great information found here, I really like your blog. Thanks very much for the share. Keep posting.
Stem Cell Therapy

My son is on day 27 of a chronic headache... he was taking the exact same meds that you said the patient was taking. Where can I get a blood smear?

What dosage did you prescribe?

I was diagnosed with Lyme disease in February 2013. I have a headache every single day since then. Sometime light, but sometimes they are so horrible that nothing helps. This has completely ruined my quality of life. No dr has been able to help me so basically I've just learned to deal with the pain. Any suggestions?