My new 40 year old patient is besides herself.  She has struggled with a tickborne illness for 5 years.  She has managed to keep her job, but barely. She cries uncontrollably.  She is very irritable and angry. She complains of anxiety and panic attacks.  Mostly, she is depressed. She admits to night sweats.  She denies air hunger.  Ongoing symptoms include exhaustion, chills, poor sleep, tinnitus, painful lymph nodes, abdominal pain and nausea, GERD, irregular menses, joint pain, headache, dizziness and vertigo and feeling off balance, dysesthesias and crawling sensations, panic attacks, suicidal ideation (no plan or intent), brain fog, trouble with with focus and concentration and thinking clearly. She has had a lot of unexplained abdominal pain over the years.

She has seen 2 "Lyme"  doctors off and on over the last 5 years. She has also seen many "regular" doctors.  The first Lyme doctor diagnosed Bartonella and treated her extensively with minocycline, azithromycin and rifampin.She didn't get better.   A second Lyme doctor confirmed the diagnosis of Bartonella.  Laboratory tests were negative but the physician was certain on clinical grounds the diagnosis was correct.   After all, what else causes severe GI symptoms and abdominal pain?  Anxiety and irritability are typical symptoms, almost diagnostic - she heard somewhere.

One Lyme doctor treated her with ivermectin for one year.   She states she thinks she had a Herxheimer reaction but does not know why this drug was prescribed. The treatment did not help.

The same doctor prescribed Biaxin and rifampin.  The dose of rifampin was increased to 1200 mg daily.  After 9 months of this therapy she has gotten worse.  The doctor told her she has not been treated long enough. She decided she has waited long enough.  She thinks she had Herxheimer reactions but never got better.

She has never been treated for Babesia or even Lyme. A course of doxycycline with other Lyme drugs was never prescribed -- or anti-Babesia therapy.

A LymeWestern Blot was equivocal by MDL standards, IgG only.
Serologial tests demonstrated a low positier titer for Rickettsia species.
All other serological tests, inclusive of  Bartonella and Babesia were negative.
CRP was elevateed at 10.

I am able to offer another test in my CLIA certified blood parasitology lab.

Her an image taken from her Giemsa smear: 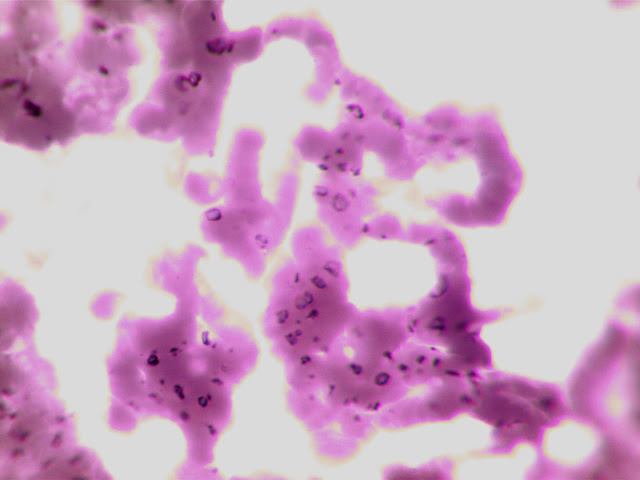 If a patient doesn't respond to a therapy the clinician is obligated to go back to the blackboard and take another look.

The slide shows marked infection with the malaria-like red blood cell parasite: Babesia. Few things are black and white in Lyme's orbit. This is an exception.

This CDC endorsed standard malaria/Babesia smear is a gold standard.    Many tests circulating in the Lyme-osphere are questionable.

Even without this piece of dramatic evidence, the patient should have been treated for Lyme, e.g. Doxycycline/Ceftin (Tindamax, Flagyl, disulfiram and others) and also treated for Babesia.

This poor long-suffering patient went  5 years, with night sweats and profuse tearfulness (depression) and Babesia was never considered or treated.

Hundreds of things can cause abdominal pain other than Bartonella, etc, etc. The symptoms of Lyme and common coinfections overlap. No one symptom should be attributed to  a particular tickborne pathogen.

Babesia treatment includes Zithromax and high doses of Mepron plus Coartem plus Krintafel. It is important to completely knock out Babesia when first encountered.  Otherwise, the parasites relapse and return mean and drug resistant.  *Please don't use Malarone because Mepron, the yellow paint is hard to stomach. Two malarone twice daily provides a daily Atovaquone dose of 1000 mg.  Two tsp of Mepron twice daily provides 3000 mgs of atovaquone, three times the dose. This dose falls within FDA approved, manufacturer guidelines. This high initial dose must be used to avoid drug resistance and years of misery. If its virgin Babesia you have one change to hit it hard and fast. Don't miss.

I am optimistic. We will get her better and sooner rather than later.

So, what to do if it is to late and drug resistance of Malarone is a fact? I have relapsed many times, and Malarone don't work anymore, no other options, is that what you are saying, years of misery only what's left? scary